Preparations for the Olympics have been responsible for the increased harassment and displacement of unhoused residents of Tokyo. In particular, the reconstruction of the Olympic Stadium has led to the displacement of residents of Meiji Park as well as residents of the nearby Kasumigaoka Apartments government housing. Other Tokyo public spaces, such as the Miyashita and Shibuya Parks, have also seen increased policing, privatization, and exclusion as developments and gentrification accelerate in the surrounding areas. The increase in surveillance and militarization in Tokyo — trends that accompany all modern Olympics — is occurring alongside national-level efforts to remilitarize and expand surveillance capabilities. With right-wing, conservative forces growing in power in Japan’s government, critics of the Games argue that the Olympics are being used to reinforce nationalist-imperialist narratives.

In 2011, radioactive material was released from nuclear power plans in Fukushima as a result of an earthquake and tsunami. Hundreds of thousands of residents were evacuated. The Japanese government has now cut off housing assistance to all those evacuees on the basis that it is safe to return, and the 2020 Games will be framed as the “reconstruction” or “recovery” Olympics. Although some evacuees have returned and tourism has resumed in the area, some activists, evacuees, and even scientists believe the region is still not safe, as the level of dangerous exposure is disputed. Many evacuees are refusing to return, albeit for diverse reasons that are not all health-related. Activists argue that even if the region is now safe for visitors, the Olympic narrative of recovery obscures the fact that tens of thousands of residents are still struggling — now without government support — to recover from the trauma and disruption of displacement.

The Tokyo Olympics were postponed in 2020 to 2021 as a result of the Covid-19 pandemic. In 2020, the IOC and Tokyo 2020 faced criticism for being slow to acknowledge the Games could not take place that summer. In 2021, the Olympics organizers again faced significant global criticism for insisting that the Games would happen despite the risk of being a superspreader event. As of May 2021, less than 3% of Japanese people were vaccinated and the country declared a state of emergency. Some areas had a shortage of hospital beds and supplies, but Tokyo 2020 claimed to require 10,000 medical workers and the organizing committee asked for hospital to beds be on standby for athletes (several prefectures’ governors refused this request). A request for an additional 500 nurses to volunteer for the Olympics stoked particular outrage. Medical experts from Japan and elsewhere called for the Games’ cancellation. Public opinion polls showed that as many as 83% of Japanese people did not want the Olympics to take place in 2021. Even though foreign spectators were not allowed, some 80,000-100,000 athletes and support staff still entered Japan, interacting with another 80,000 mostly unvaccinated local volunteers. Postponement is estimated to cost Tokyo and Japan an additional $6 billion.

Originally budgeted at $7.3 billion, the Tokyo Olympics were on track to cost closer to $25 billion, even before the pandemic hit, according to a report released by the federal Board of Audit in October 2018. Meanwhile, the former head of the Japanese Olympic Committee, Tsunekazu Takeda, resigned in 2019 amid accusations that the bid committee had paid bribes of around $2 million to guarantee the IOC would choose Tokyo to host the 2020 Olympics.

反五輪の会 (Hangorin no Kai) is a collective that opposes the 2020 Games. Its name translates to Anti-Olympic Group. Hangorin no Kai has played a leading role in forging transnational connections among anti-Olympic groups, with representatives having visited Rio de Janeiro, Pyeongchang, and Paris. The collective also launched the Anti-Olympic Arts Council and the Planetary No Olympics Network, two platforms that have emphasized and strengthened transnational links. Known for its creative art interventions, Hangorin no Kai grounds its work in lived experiences, in areas ranging from homelessness and disability struggles.

東京オリンピックおことわリンク (Tokyo Olympics Okotowalink, or just Okotowalink) is a coalition of organizations that oppose the 2020 Games. ‘Okotowari,’ written in Japanese in the image above, can be understood as “we refuse!”, such that the group’s name, Okotowalink, is a pun about refusing the Tokyo Olympics.

Neru-kaigi, roughly translated as Sleep Collective, advocates for and supports unhoused communities through weekly activities to monitor and serve the neighborhood of Miyashitu Park.

It is important to note that these three groups — Hangorin no Kai, Okotowalink, and Neru-kaigi — have overlap in membership and work in partnership against the 2020 Olympics and the Games’ impacts. 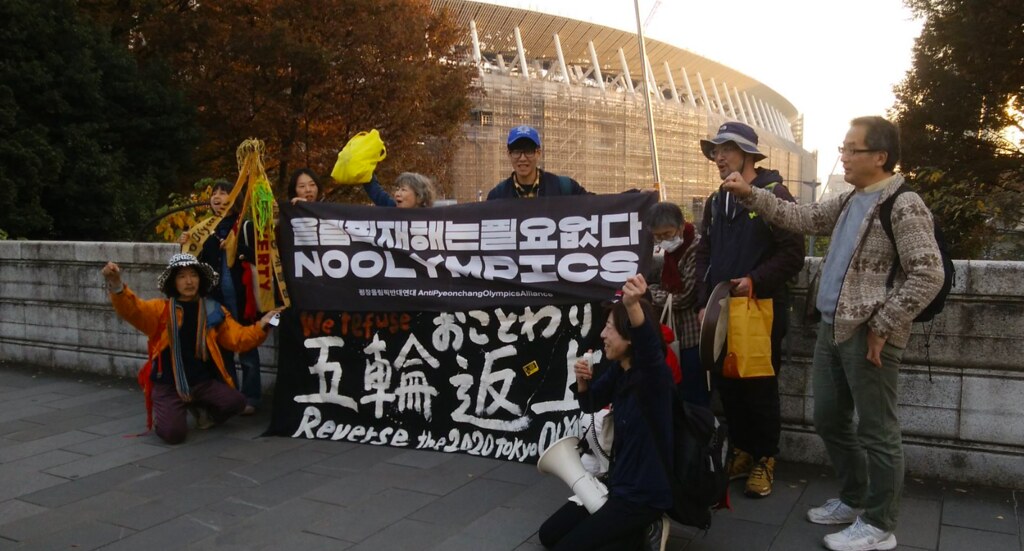 2019 | Hangorin no Kai | No Time for Your Festivities: No Olympics Nor Emperor! [Statement] [English] [Japanese] [Korean]

2021 | Victoria Kim & Hanako Lowry — The LA Times | Beneath the Olympic flame, some of Tokyo’s most vulnerable stay tucked out of view [Article] [English]