Rio de Janeiro was chosen as the host of the 2016 Olympics in 2009, when Brazil’s economy was winning admiration from The Economist and then-president Lula was bathing in famously high popularity ratings. Government officials and event organizers framed the Olympics as an appropriate celebration and display of Brazil’s growing political and economic global might — and many Brazilians agreed. But even at this moment of optimism, there were causes for concern. The 2007 Pan-American Games, effectively the trial run for the Olympics, had gone overbudget, displaced favela residents from their homes, and left ‘white elephant’ sports infrastructure — some of which couldn’t even be reused nine years later for the Olympics. Within three months of the Olympic announcement, the City of Rio announced 119 favelas would be removed.

Local resistance prevented the removal of many of those favelas, but an estimated 77,000 people were still evicted by the city government between 2009 and 2015. According to Amnesty International, police killings spiked in April to June 2016 by 103% compared to the same months in the previous year, part of a broader trend of increased police violence in the lead-up to each of Brazil’s mega-events. In general, the much touted investments in transit did not address the urgent needs of the city or metropolitan area’s working class commuters. One promised Bus Rapid Transit (BRT) line has still not been completed, while another has been partially shut down since 2017 due to a lack of maintenance and security in some bus stations. Every single environmental legacy promise was abandoned or incomplete by the time the Olympics began — including the pledge to finally clean the city’s polluted bay waters. In January 2016, the state of Rio declared a ‘state of calamity’ due to its financial woes. Public hospitals were shut down while others kept medical supplies from local patients in order to keep them in stock for the Olympics. As of 2019, the city and state of Rio remain in financial trouble. The Rio 2016 organizing committee’s debt totals $113 million, a pittance compared to the billions of public funds spent to prepare the city to host the games. Former governor Sérgio Cabral and Rio 2016 head Carlos Nuzman were both charged (and Cabral convicted) for graft tied to the Olympics and its infrastructure projects.

Former mayor Eduardo Paes tried to frame the Olympics the “inclusion games,” but media narratives since suggest they are more likely to be remembered by the activists’ moniker: the exclusion games.

The Popular Committee of the World Cup and Olympics was a coalition of social movement organizers, academics, NGO representatives, and residents of threatened communities that organized protests, public debates, and support for communities facing human rights violations linked to the mega-events. Rio’s coalition was part of a broader national coalition that formed around the 2014 World Cup.

RioOnWatch was founded in 2010 as a hyperlocal-to-global news platform that aimed to bring visibility to favela community voices ahead of the 2016 Olympics. Today it continues working to engender a more accurate picture of favelas and the potential of favela-led community development in Rio and around the world.

Located on the edge of zone marked for the Olympic Park, Vila Autódromo was targeted for removal soon after Rio was chosen as the 2016 host and was ultimately reduced from more than 600 families to just 20. Since the community had been threatened with removal before, residents suspected the Olympics were just a cover story for another motivation for eviction: real estate speculation. Residents’ tireless resistance mobilized support from around the city and gained extensive international media attention. The City employed tactics to intimidate residents, divide the community, and wear resisters down, but some families still refused to leave, winning a deal to remain on the site. Vila Autódromo and its Evictions Museum project continue to inspire others to fight for their right to remain, in Rio and around the world.

Countless favela-based organizations and collectives challenged and documented the myriad ways the mega-event preparations were harming their communities. Locally-run media platforms like Maré Vive, Coletivo Papo Reto, Voz das Comunidades, and O Cidadão were essential sources of information and mobilizers of resistance for their neighborhoods, Complexo da Maré and Complexo do Alemão, which were occupied by armed forces and military police in the build-up to the Olympics in the name of making the city more secure.

The Rio Olympics marked a new milestone in the digital tools available to organizers and media activists challenging the Olympics. Collectives like Mídia Ninja came to visibility in the context of their live digital reporting on the protests that swept across Brazil in 2013. These protests, during the Confederations Cup and one year before Brazil’s FIFA World Cup, marked the first time a host country had mass protests against World Cup or Olympics before the sports event began. 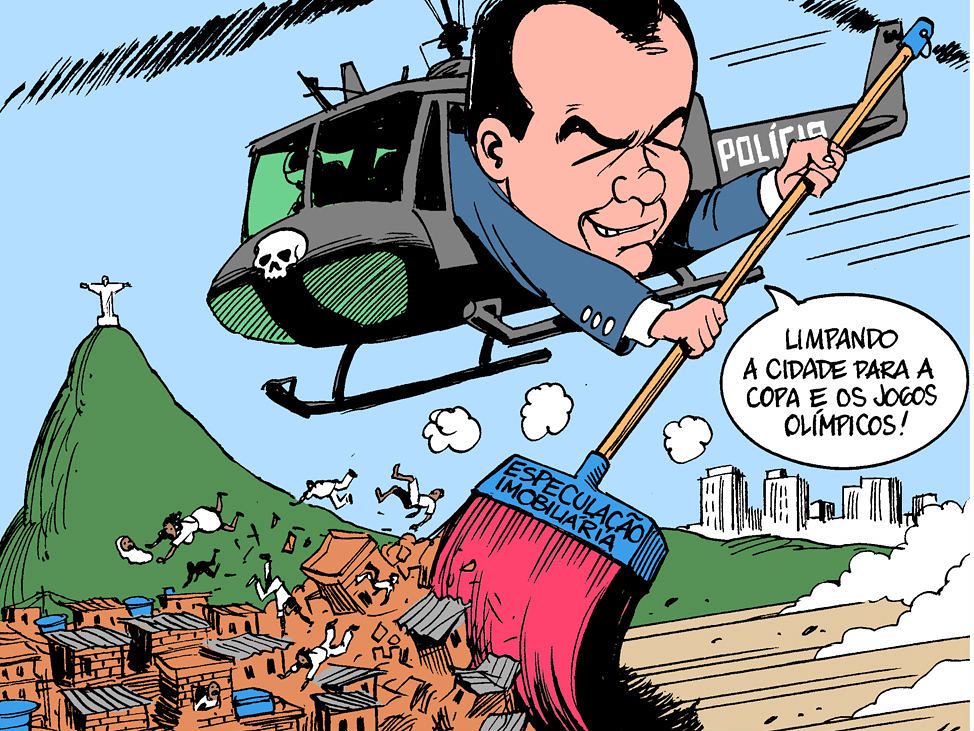 2016 | Aaron Gordon – Vice | The Rio Games were an unjustifiable human disaster, and so are the Olympics [Article] [English]

2014 | Dave Zirin | Brazil’s Dance with the Devil: The World Cup, the Olympics, and the Fight for Democracy [Book] [English]

2016 | Olga Khazan – The Atlantic | What happens when there’s sewage in the water? [Article] [English]

2018 | Theresa Williamson – RioOnWatch | Not everyone has a price: How the Small Favela of Vila Autódromo’s Fight Opened a Path to Olympic Resistance [Article series] [Portuguese] [English]

2016 | Theresa Williamson – OpenDemocracy | Rio’s real vs. unmet legacies: what they tell us about the future of cities? [Article] [English]

2015 | Patrick Ashcroft – RioOnWatch | Two centuries of conning the ‘British’: The history of the expression ‘É para inglês ver,’ or ‘It’s for the English to see’ and its modern offshoots [Article] [Portuguese] [English]

2016 | Adam Talbot – RioOnWatch | Reflecting on the Games: A look behind the Olympic smokescreen and the Rio 2016 ‘success story’ [Article] [Portuguese] [English]

2016 | Christopher Gaffney | An Anatomy of Resistance: The Popular Committees of the FIFA World Cup in Brazil [Chapter] [English]