After Hamburg, Budapest, Rome, and Boston dropped their bids for the 2024 Games, LA and Paris were the only two contenders left. The IOC opted to avoid an equally embarrassing selection process in four years’ time and took the unprecedented step of awarding two summer Olympics at once: 2024 to Paris and 2028 to LA.

Much of the Games’ action will be concentrated in Saint-Denis, a working-class neighborhood in Paris’ northern suburbs. New infrastructure including the Olympic Village and a swimming complex will be built in Saint-Denis, with the athletes’ village to be turned into residential units after 2024. New transit links and a new station, already planned as part of Paris’ existing Grand Paris project, were supposed to be completed by the Olympics but the line connecting Saint-Denis is delayed, now expected to be completed by 2026. Critics of the Olympics are concerned that developments planned for Saint-Denis will increase real-estate speculation and displace current low-income residents. Some have criticized the Grand Paris project for privatizing public space and misusing public funds, expressing fears that the Olympics — with its initial $8 billion budget — will just extend these trends. Plans for the media village and for a training pool in Aubervilliers both call for the destruction of park space or community gardens. Other major concerns include the militarization of the city that tends to precede the massive security operation of the Olympics itself, and the potential negative effects on the environment. In 2021, France passed a new security law that expands the police’s surveillance powers and places restrictions on media coverage of police. Unlike in several other European cities in recent years, residents of Paris and Saint-Denis were not given the option to vote on hosting the Olympics in a referendum. As of mid-2019, some 32,000 people had signed a petition demanding a referendum. Paris’ next mayoral election falls in 2020, at least two political parties have expressed opposition to the Olympics: the leftist La France Insoumise party, and the Green Party (EELV).

Association NON Aux JO2024 à Paris (No to the 2024 Paris Olympics Association) is a collective of people opposed to the Games on the basis they will be a “fiscal, economic, and ecological disaster.” When Paris was bidding for the Olympics, the group launched a petition demanding the public be able to weigh in on the decision to host via a referendum.

Not opposed to the Olympics per se, the Comité de Vigilance JO 2024 à Saint-Denis (The Saint-Denis Vigilance Committee for the 2024 Olympic Games) is concerned about the effects of hosting on the Saint-Denis neighborhood and broader Seine-Saint-Denis department, which is one of the poorest counties in France.

Saccage 2024 opposes the ecological and social devastation caused by the Olympic Games in Paris in 2024. Composed of residents of Seine-Saint-Denis and its surroundings, as well as additional collectives and associations, the coalition defends the spaces where participants live, meet, forge links, help each other and have fun.

Jardins à Defendre (JAD) is an occupation of the Aubervilliers Workers Gardens that aims to protect these community green spaces from plans to replace some garden plots with an Olympic-standard training pool and solarium. 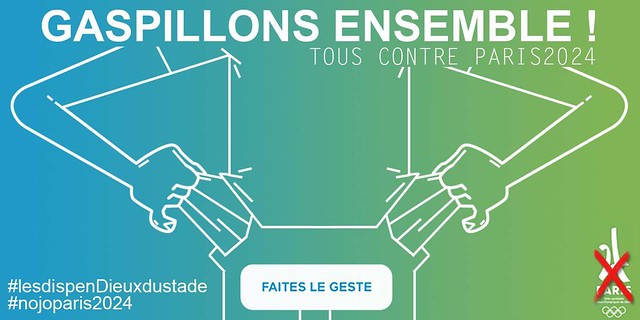 2017 | Marie Doezma – CityLab |What can the Paris Olympics do for Saint-Denis? [Article] [English]