The New Labour government led by Tony Blair won the bid to host the 2012 Olympics with an absurdly low cost estimate of £2.38bn and extravagant claims they would inspire a generation to participate in sport, make Britain a healthier nation, and bring an increase in tourism in 2012 and jobs and economic benefits in the longer term. London 2012 was located in Stratford in the deprived East End of London, which, it was claimed, would be regenerated to the benefit of local people leading it to ‘converge’ with the more prosperous west of the city and provide affordable housing for locals.

London 2012 has no excuses for its failures. Game Plan, a 2002 UK Government report signed by Tony Blair and Tessa Jowell, the Sports Minister, had correctly warned that none of these claims would be fulfilled and said mega-events like the Olympics were “more about celebration than economic returns.” Unsurprisingly it was ignored. Scheming with George W. Bush to invade Iraq, Blair had hesitated in early 2003 to launch his vanity project. He later said to a journalist: “You wouldn’t want literally at the moment you were going into battle to be talking about bits of the Olympics.”

As with all Olympics, London 2012 saw costs escalate dramatically. The true costs are unknown, falling anywhere between £12 billion and £23.75 billion, and continue to rise. Tourism declined in the summer of 2012, local businesses suffered, and people were not inspired to become more active and healthy.

London 2012 demolished a valuable industrial district, now described as a ‘hive of activity and industrial innovation’ by the London Legacy Development Corporation, but falsely written off in the bid as a wasteland to justify its compulsory purchase. This resulted in a loss of jobs for local people while the so-called “legacy” has not led to the creation of new jobs or the building of affordable homes as claimed. Two low-cost housing estates and two Travellers sites, an important road cycle racing track, and a beautiful set of garden allotments were also demolished. Life has become harder for East Londoners as the area has gentrified. London 2012 was characterised by lies about the creation of a new urban park, rail infrastructure gains, and other neighbouring development projects which have been falsely appropriated as Olympics legacies.

The Counter Olympics Network led a campaign of opposition, including demonstrations, to the Corporate Games. Notably, the Greenwash Gold campaign targeted three particularly noxious Olympics sponsors: Dow, which refuses to assist the victims of the Bhopal disaster; BP, absurdly called London 2012’s Sustainability Partner; and RioTinto, a monster mining corporation devastating communities from Utah to Mongolia. Opposition also focused on the expansion of state surveillance and security, including extraordinary measures like the deployment of armed police and the siting of missiles on top of tower blocks near the Olympic Park, as well as the employment of private security corporation G4S. The Counter Olympics Network’s Anti-Olympics Torch Relay in East London linked up with green campaigns like Save Lea Marshes fighting to protect local parks.

For the first time the Paralympics, held against the background of the Conservative/Lib-Dem Coalition Government’s austerity cuts, witnessed protests by disability activists against the treatment of people with disabilities in the UK and against the Olympics corporate sponsor Atos for its role in assessing disability claimants. Ministers were booed in the Olympic stadium.

This page was produced in collaboration with Julian Cheyne from the Counter Olympics Network and GamesMonitor.org.

The Counter Olympics Network links people and organisations critical of some or many aspects of the 2012 Games. It has worked to hold the organisers of the Olympic Games to account, and to ensure the promises made to the local people impacted on by the Games are kept. [Website | Twitter]

Games Monitor is a network of people raising awareness about local, London and international issues within the Olympic development processes and mega events. It aims to deconstruct the ‘fantastic’ hype of Olympic boosterism and the eager complicity of the ‘urban elites’ in politics, business, the media, sport, academia and local institutional ‘community stakeholders’. [Old archive | New website | Twitter]

Save Leyton Marsh — now Save Lea Marshes — began as a campaign against Leyton Marsh being the site of a wasteful temporary basketball training facility for the 2012 Olympic Games. [Website | Twitter]

The Greenwash Gold campaign brought together a number of groups — including the UK Tar Sands Network and the Reclaim Shakespeare Company — to highlight the absurdity of “green Games” discourse given Olympics sponsors included BP, Dow Chemical, and Rio Tinto. 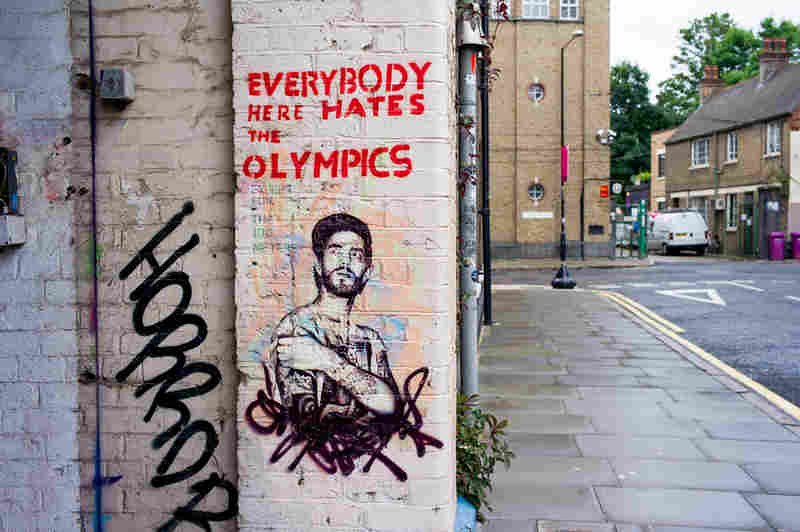 “In the beginning, almost everyone agreed that it would be a terrible idea for London to host the 2012 Olympic Games.” – Michael Joseph Gross

“We conclude that the quantifiable evidence to support each of the perceived benefits for mega events is weak… they appear to be more about celebration than economic returns.” – Game Plan

2021 | Julia Gregory – Hackney Citizen | ‘It broke up our families’: The Travellers who made way for the Olympic Stadium are still fighting for a new site [Article]

2012 | Ashok Kumar – Ceasefire Magazine | Want to cleanse your city of its poor? Host the Olympics [Article]

2014 | Jules Boykoff | Activism and the Olympics: Dissent at the Games in Vancouver and London [Book]

2012 | Jonathan Jones – The Guardian | London 2012: the graffiti clampdown is like Versailles versus the sans-culottes [Article]